The Cynicism of Nationalization

We’ve written about nationalization before (i.e. the confiscation of private property done by the Communist administration in Romania). It was a painful experience for many thousands of middle class and upper class citizens (as well as many lower class, despite contrary Communist propaganda), who were left over night without any property, and labeled as criminals, saboteurs and “exploiters of the working class”. It wasn’t just buildings, factories and land that were confiscated, but also means of production and livestock (such as oxen, cattle, carts or horses that were confiscated from well-off peasants). However, the account below, given by Pavel Stefan, Romania’s communist Minister of Internal Affairs between 1952-1953, offers proof of the cynicism behind this indiscriminate measure taken by the communists:

There was an attorney called Calota, who helped us (author’s note: the Communists) a lot in 1945. He was arrested because he was a member of the National Peasants’ Party, and his house was confiscated. I asked him why he was arrested, maybe he told something he shouldn’t have. He told me he didn’t. Then, I decided to call Gheorghe Pintilie (author’s note: the general director of Securitate, i.e. the Secret Police), and ask him, because he personally knew Calota very well. Pintilie replied: “Who knows how many people we arrested, just because we needed their homes!?”

Want to hear more Communist stories? Join us on our upcoming walking tours!

This entry was posted in Uncategorized.

Doftana Penitentiary, located about 1 hour drive north of Bucharest, is the ultimate paradox in Romanian history. Having served as a detention center for many of the early Communists during the inter-war period (including the first Communist rulers of Romania: Gheorghe-Gheorghiu Dej and Nicolae Ceausescu), it soon turned into a tool of revenge against the political elite that opposed Communism. Today, it lies in complete ruin, completely forgotten by most Romanians. This article is an attempt to do it some justice.

Built as a fortress and opened in 1895, Doftana Prison has long served as a detention center for political prisoners, despite the seemingly democratic regime that ruled Romania prior to 1946, when Communists took over power. The prison was used until 1960, when it was turned into a museum. This is where many protesters from the Peasant Uprising in 1907 were incarcerated (peasants revolted violently against the socio-economic regime that doomed them to poverty and pseudo-enslavement). This is also where some of the Fascist thought leaders in Romania, such as Corneliu Zelea Codreanu or Horia Sima, served time. By the time the Communist movement was banned from Romania in 1924, Doftana Prison already had a tradition as a detention center for political prisoners, so it became the main destination for many of persecuted underground communists during the interwar period. One of the first Communist figures to spend time (and eventually die of pneumonia) at Doftana was Max Goldstein, the mastermind behind the first terrorist attack against the Romanian Senate. 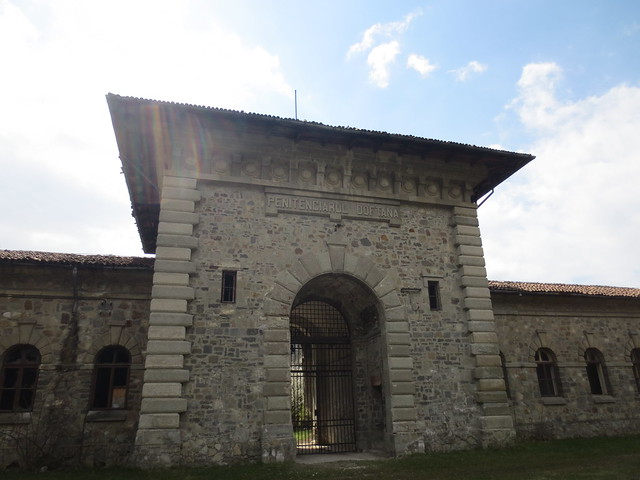 In the early hours of November 10th, 1940, a powerful earthquake struck Romania, severely damaging Doftana Prison, and killing and injuring more than 300 prisoners. Some of the Communist leaders who were imprisoned here at that time, including Ilie Pintilie, Andrei Prot, Ion Herbac, Ioan Galuzinschi, Alexandru Niconov, were killed by the rubble resulting from the earthquake. At the time of this earthquake, the prison had already been affected by two previous smaller-scale earthquakes: one in 1929, and one in October 1940. Gheorghe-Gheorghiu Dej, the indisputable leader of the Communist movement, who was locked at that time in Doftana for his role in the railway workers’ uprising of 1933, has appealed to the prison administration for the relocation of the prisoners, considering the prison to be too damaged to be safe. The administration rejected his plea. It is said that Gheorghe-Gheorghiu Dej had an opportunity to escape right after the earthquake, when the cell where he was locked collapsed, leaving him injured on the ground, outside the prison walls. However, he preferred to help the other inmates get out of the rubble produced by the earthquake 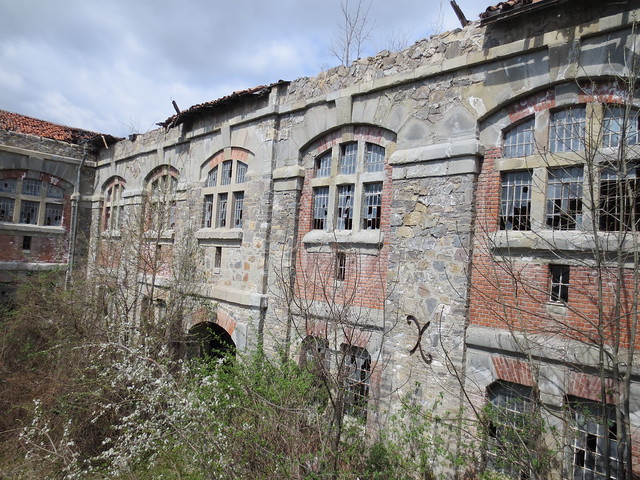 Dictator Nicolae Ceausescu was also imprisoned here for a couple of years, and also spent time in the infamous H cells, which were used for punishment. Another wave of political prisoners was incarcerated at Doftana in 1935 and 1937, after violent strikes by industrial workers in Bucharest and Ploiesti (the oil center of Romania). 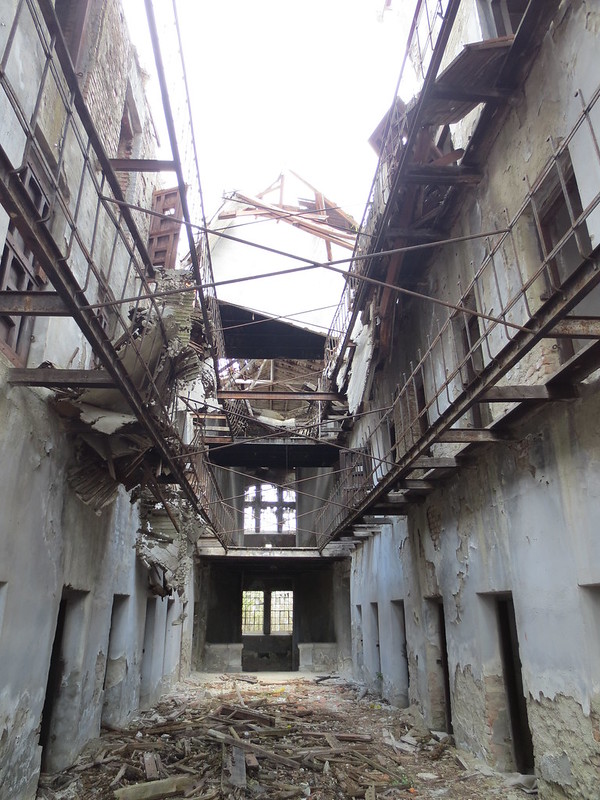 Prison conditions were tough, and human rights were often overlooked by the administration. Prisoners were served only some polenta and basic vegetable soup. They were routinely beaten up using batons, or kept naked and barefooted in cold weather. Communists, in particular, were beaten until they would renounce their communist ideals and beliefs. Cells had no furniture or carpets, and were routinely soaked in cold water. As a result of the rough conditions, several early Communists died at Doftana, including Fonaghi, Lisavoi, Smatoc, Mironiuc, Sevcencu, and Onofrencu. 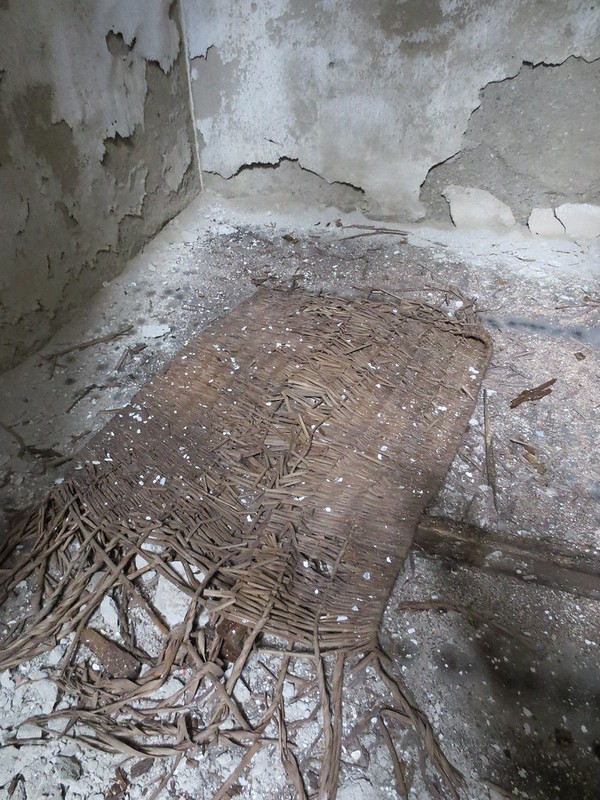 Despite all this, the prison became an underground communist “university”, where political prisoners received training from other Communist Party leaders, including the teachings of Marx and Lenin, the history of USSR or of the Communist Party, as well as political economics and philosophy. Many of the propaganda materials were smuggled in by new prisoners, and distributed incognito from cell to cell. Doftana Prison is also considered responsible for the radicalization of many of the early Communists, who re-joined the ranks of the illegal Communist Party as soon as they were released. 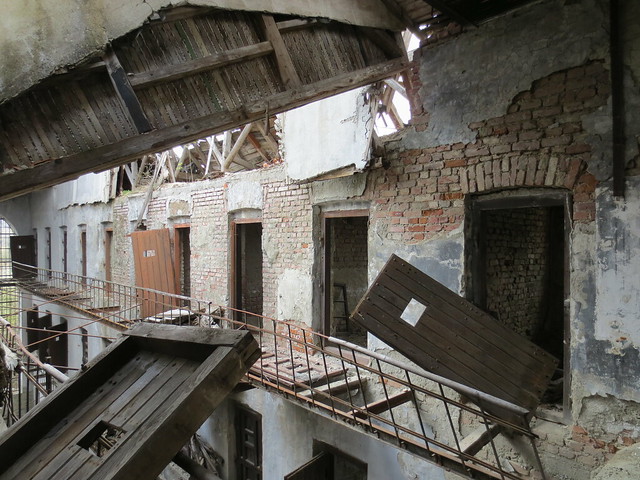 After passing the main gate, newly arrived prisoners had to go through a name call, typically accompanied by physical violence by the guards. The prison warden at that time, Savinescu, would order the more unruly prisoners to be locked up in the so-called “H” section or in the dark cells (cells without any natural light). After the name call, prisoners would go through a body check, where any precious objects would be confiscated by the prison staff. 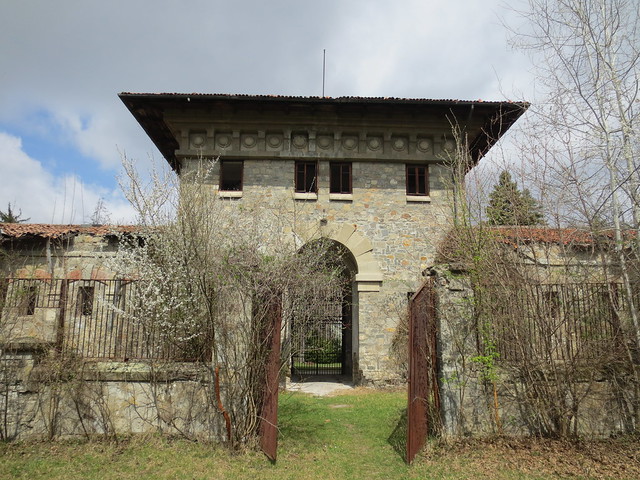 The prison is shaped as a horse-shoe, with a garden in the middle, which was taken care of by one of the Communist prisoners, Ion Galuzinschi, who ended up dying in prison after 15 years of detention. It had a total of 308 cells, distributed into 8 sections (named A-H): 3 naturally-lit and 5 dark. 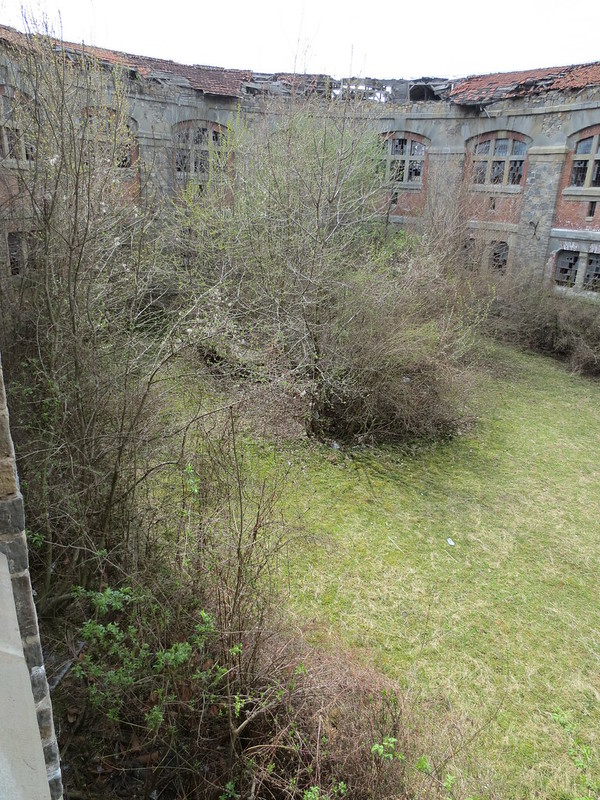 The naturally-lit cells were reserved for prisoners with sentences shorter than 1 year, and were located in sections A, B, and C. Each section had a 3 floors, totaling 63 cells. The natural light came from the inner courtyard through huge, barred windows, which are now broken. Section A housed the prominent leaders of the Communist movement: Gheorghe-Gheorghiu Dej, Chivu Stoica, Emil Bodnaras, and Lazar Grunberg. Section B was dedicated to those sentenced to hard labor after the strikes of 1935-1938. Prisoners locked up there were subjected to hunger, as they were only allowed to receive 3 kilos of food per month. 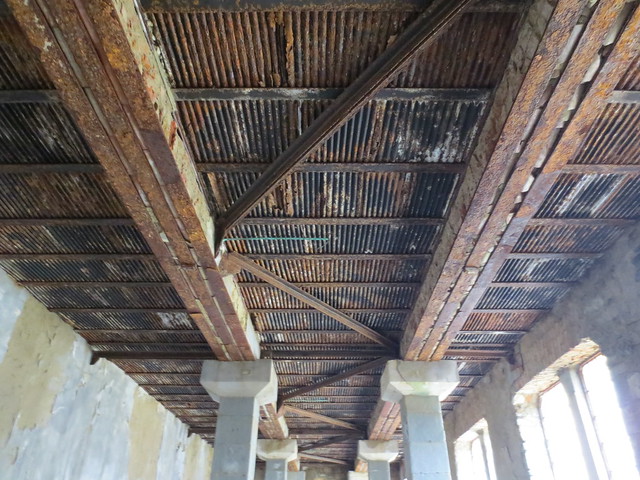 Section F was presumably the worst section, as it featured the dirtiest and darkest isolation cells. Vasile Luca, one of the early communist leaders, is said to have spent time in the F cells, after an altercation with one of the guards. 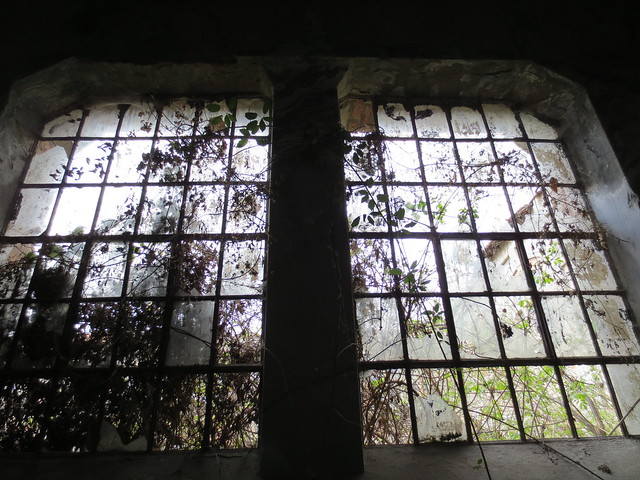 The H section was dedicated to the punishment of rebellious prisoners. It had 40 small, completely dark cells with absolutely no furniture inside. The only allowed accessories were a wooden bowl, a wooden spoon, and an empty metal can that would serve as a toilet. The floors of the H cells were intentionally kept wet by the guards, to make life even more difficult for prisoners. The punishment usually lasted between 2-3 months. Food for the H cell tenants typically consisted of a very salty soup and a slice of polenta. H cell prisoners wouldn’t receive any food for two days every week. 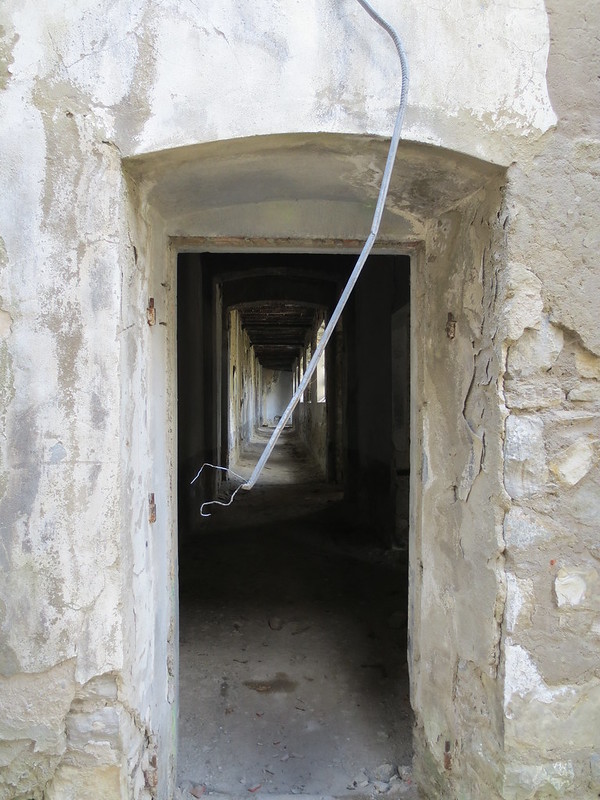 Prisoners were allowed to have a 30-minute long between two of the prison walls. Prisoners who were caught sharing cigarettes or food with others would be punished by being sent to dark cells.The prison lazaret was poorly equipped, and anybody who had to use it would risk death from further infection or medical mistreatment. 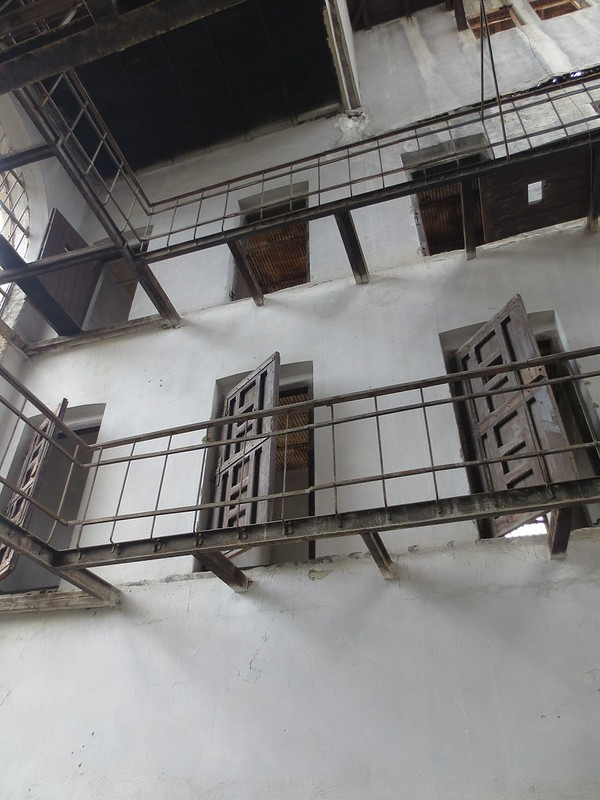 A hunger strike was organized during the winter of 1922-1923 by a group of 25 political prisoners. The prison ward retaliated by locking the protesters up in abandoned and unheated cells that had no windows. After 4 days, the freezing prisoners were released from these cells, and eventually granted a milder treatment. Prisoners received the right to work in a prison workshop in 1924, but this right would soon be revoked one year later, after altercations between prisoners and guards. 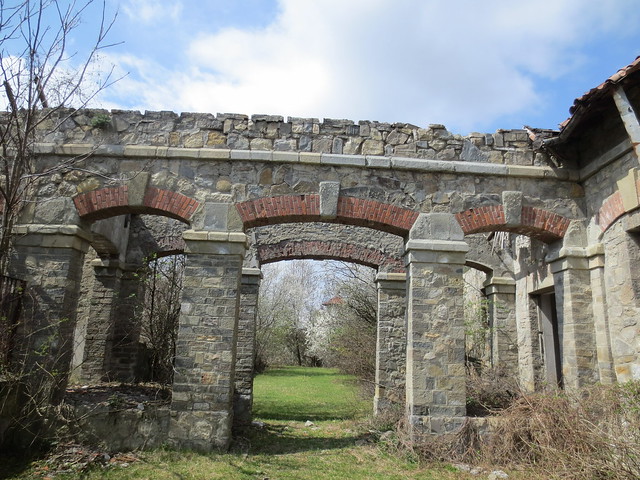 The prison ward Cristescu introduced the so-called “silence rule”, which banned prisoners from talking to each other. This rule was abolished in April 1936, after protests by the prisoners. Until its abolition, prisoners would communicate through hand gestures or Morse signals. 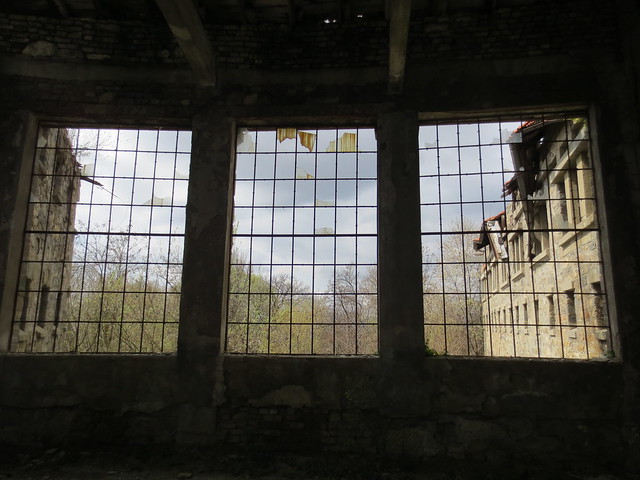 Prisoners who died during their detention were buried in unmarked graves in an improvised cemetery just outside the prison walls. The cemetery was known among inmates as “The Three Plum Trees”.

Doftana Prison became a place of pilgrimage during the regime of dictator Nicolae Ceausescu. It was regularly used as a ceremonial site for the students joining the Pioneers organization or the Communist Youth Organization. Ceausescu himself used to visit the prison museum quite often, and was received enthusiastically by locals and welcomed with red-carpet ceremonies. Despite being declared a historic monument, the prison is now a complete ruin, having suffered damages during the earthquakes of 1940, 1977, as well as during the winter of 2011, when the massive snowfall caused the roof to collapse. 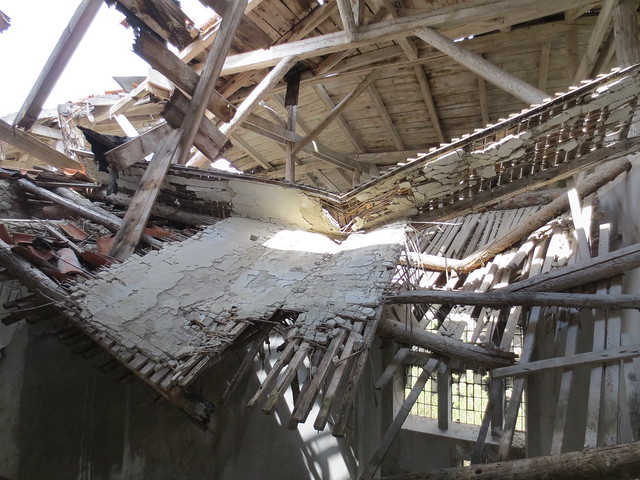 According to estimates, the prison is valued at about 1.2 million euro. Some investors were interested in buying the building and turning it into a medical clinic or into a modern hotel that would still preserve the prison feeling, but none of these plans came through. In the meantime, the building continues to decay slowly but surely, exposed to the natural elements and to ignorant locals who steal construction material or scrap metal from its structures.

One of our readers has shared this amazing video filmed using a drone:

Want to hear more Communist stories? Join us on our upcoming walking tours!

This entry was posted in Uncategorized.

Psst! Looking for other tours of Bucharest?

Tour of Communism
Blog at WordPress.com.